While contributing to the Open Source project one should follow blueprints of the community project at the same time integrate his development workflow effectively.
This post is about the way I use to debug library when contributing to PnP JS Core. The same techniques can be applied to any TypeScript project. But as the SharePoint development has its nuances setup is unique in some parts.
I really hope to inspire you to contribute to Open Source too.

These libraries are required for developing PnP JS Core and should be installed globally:

Before go changing sources these project should be forked.

First one is the repo with sp-pnp-js itself, the second is a separate project, which helps to separate library unrelated code and, at the same time, keep track of these changes as they can be important for a contributor.

Projects' folders should be located in the same root folder.

[namespace] stands for you or your company GitHub account.

Separation of the sources makes your commits cleaner automatically, as you only change the actual part of the library.
Debug project is linked with source project in such a way, that no ahead of time transpilation is needed, no npm link is needed. Once added or changed the method in the library is immediately effected in debug project (even with IntelliSense). Here is the power of TypeScript.

Dependencies should be restored in both projects' folders:

I personally still prefer yarn over npm (even v.5). It still faster and works perfectly for me.

VS Code is our editor of choise

Open both projects in VS Code. Workspaces are the best option here. 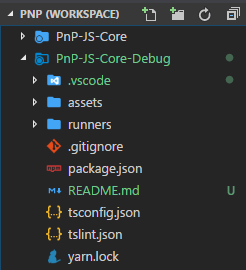 This new workspace feature allows opening multiple folder-projects in one instance of VS Code. It's especially handy in our case of applying changes in the lib's project and another one to running debug stuff.

This will allow syncing your repository sources with main repo with:

It's recommended using feature branches for code changes related to a specific feature or bug fix.

Before creating a feature branch make sure:

It's better to prefix feature branch with dev-.

On first run SharePoint environment connection should be initiated:

You'll be prompted with SharePoint web URL and credentials, just follow the wizard:

Connection is saved to config files which are better to exclude from a git repository.
By default config path is ./config/private.json. Passwords in configs are stored in an encrypted way.

Place debug break points in PnP JS Core .ts sources or your custom code.
Open a runner which executes logic to test and start a debugger for the current file.

Now all the power of VS Code debugger is our oyster! 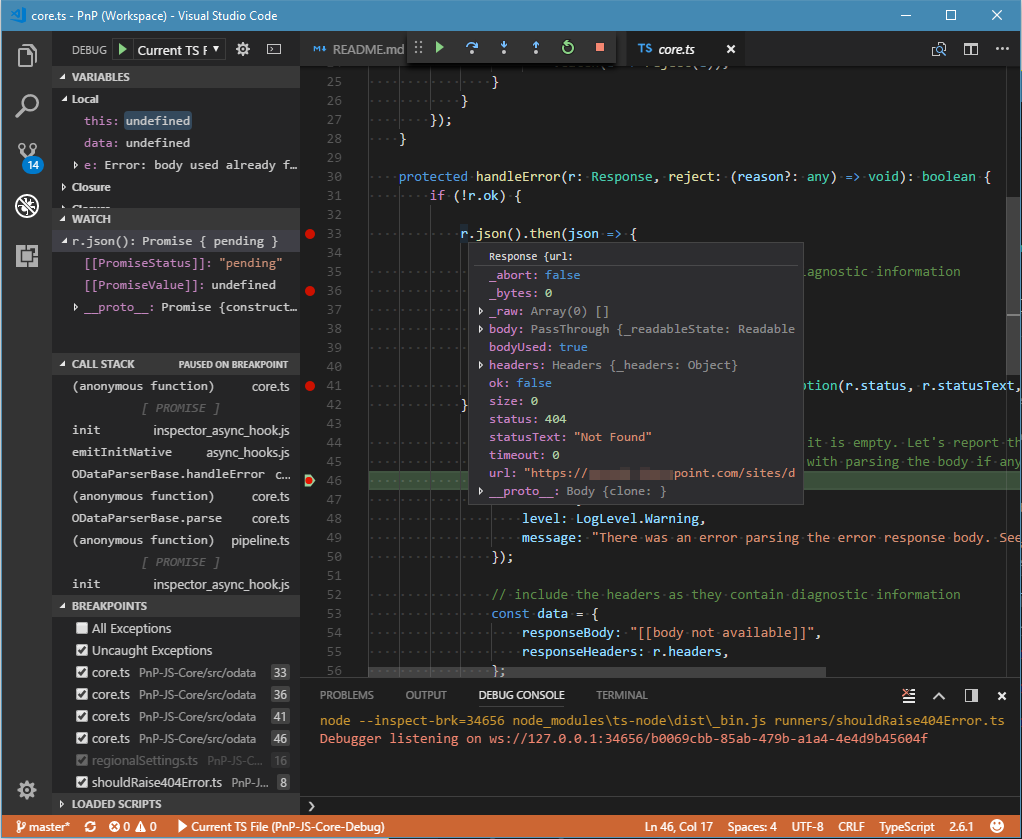 Office 365 and SharePoint Online in particular rush in the direction of Modern UI and UX. The modern sites…

When dealing with SharePoint Framework (SPFx), a developer can choose local or remote runtime debug strategy. By default by…